History of the Spokane Carvers Association 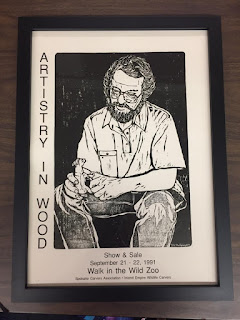 It all began with an ad in the local newspaper.  Jim Martin and his young friend John Flatt, who was 19 at the time, liked to carve.  They decided to get a group of carvers together to enjoy carving.  Jim arranged for a meeting room at the V.A. Hospital.  In 1980, the first meeting was held.  A group of about ten individuals met.  Among the individuals gathered were Jim Martin, John Langelot, John Flatt (who  used a Buck knife for carving), John Miller and Dave Bell.  They met twice a month for a few months at the VA.  Then, they moved the meeting site, first to several homes then to a north-side church.

In 1986, the group moved the Lidgerwood Presbyterian Church at 4449 N. Nevada in Spokane.  This location has since become a permanent meeting place. For a few years, meetings were held the first and third Saturdays of each month in a small gathering room.  However, as the membership grew, meetings were moved to the larger meeting hall.  Starting with four members, the club has grown to 80 members.

The purpose of the Spokane Carvers Association (S.C.A.) is to promote the art of woodcarving.  With this goal in mind, the club held its first show in 1989.  Using information gleaned from other regional carving clubs the show recruited 3 judges who awarded ribbons to almost 200 carvings entered in the skill levels of junior, novice, intermediate, advanced and expert.  The first two shows were held at the Wheelebrator building at the former Walk in The Wild zoo.  When the zoo closed, the location was moved to Spokane Falls Community College, (1991-94, then in 1995 to Spokane Community College.   In 2012, due to cost increases, the show was held at the Salvation Army Gym, 222 East Indiana, Spokane.

The first show was such a success that the Spokane Carvers continue to hold an annual show, usually late in September.  The year 2016 will mark our 27th show.

In order to support the cost of a show, the club members held rummage sales and manned a rest stop on I-90 on two occasions to collect donations.  In addition, club members provide carving demonstrations at the annual Spokane Interstate Fair.  Key members who have contributed to the success of shows and rendezvous over the years are Jack Berry, Dan Eubank, Jack Kennedy, Tim Rahman, Jack Harvey, Wally Kuchling, Jan and Rod MacLean, Steve Pirtle, Tim Rahman, Gloria Strandquist, Joan Thiele and Maida Van Dissel.  Many other members assisted with show preparations and entered their carvings for judging.

In 2002, our first carving rendezvous was held at Alderwood RV Resort on Newport Highway.  Gloria Strandquist directed the first rendezvous and held the position of rendezvous chair for the next ten years.  Held beneath tents, the rendezvous is a fun-filled weekend of carving classes,  meeting other carvers, and sharing meals, a potluck supper and barbecue cookout.  The rendezvous is currently held in June at the KOA campground on Barker Road.  The rendezvous is free and helps introduce other individuals to carving.  Roger Storey is currently rendezvous coordinator.
Since the initial events,  both the show and rendezvous have grown in size and attendance and remain the primary activities of the S.C.A.  Both of these endeavors focus on promoting the art of woodcarving.  Raffles of donated items are held at both the rendezvous and show to support the cost of these events.

Over the years, several members have offered carving classes apart from the club meetings.  Gloria Strandquist held classes in her home for many years.  Later she was joined by Joan Thiele and classes were moved to the Spokane Art Supply store in the valley.  When the valley location closed, classes were moved to the valley mall Hobby Lobby.  Classes are held there each Wednesday from 12:30 p.m. to 3:30 p.m. Tom Ellis and Steve Pirtle are the current instructors at the Hobby Lobby location.
Membership in Spokane Carvers consists of both men and women in equal numbers, from 12 years of age to retired individuals.  The club encourages new members, especially youngsters.  To encourage new members, a carving class geared to the needs of beginners is held each month.  Classes for beginners are taught by experienced club members.    Every member is willing to share information, tips, and techniques with anyone who is interested in carving.  Skill level of members ranges from   novice (including youth) to expert.

In addition to those named individuals, many others, too numerous to mention, have worked hard to keep the club active and are dedicated to promoting the art of woodcarving.  A number of members have moved on to carver’s heaven, and are sorely missed.  They will be remembered for their many contributions.

Spokane Carvers Association is a  registered non-profit organization.  Meetings are held from 9 a.m. to 12 p.m. on the 1st and 3rd Saturdays of each month (excluding holidays and show or rendezvous dates).  Every member is willing to share information, tips, and techniques with anyone who is interested in carving.  Skill level of members ranges from novice (including youth) to expert. The meetings are always open to the public.  Members are encouraged to invite other individuals who are interested in knowing more about the art of carving.

For additional information or to have questions about the Spokane Carvers Association: